In this month’s blog, I write about the story of a new book, out in March 2019 with OUP, The Poetry and Music of Science. It follows from one of the consequences of a ‘theology of science’ articulated in Faith and Wisdom in Science – that of the ‘healing of the academy’. If the first is my ‘not a science and religion book’, then this is my ‘not the two-cultures book’. Here is how it happened, once upon a time …. 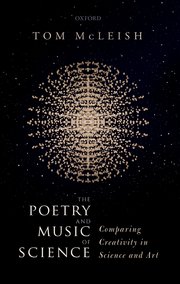 ‘I just didn’t see in science any room for my own imagination or creativity.’

Not just on one occasion, but repeatedly have I heard this from young students bright enough to have succeeded at any subject they set their minds to. Yet it doesn’t take an Einstein to observe that without the essential first step, without a creative re-imagining of nature, a conceiving of hypotheses for what might be going on behind the perceived surface of phenomena, there can be no science at all. Einstein did of course have something to say on the matter, in his book with Leopold Infeld:

I am enough of an artist to draw freely upon my imagination. Imagination is more important than knowledge. Knowledge is limited. Imagination encircles the world.

Every scientist knows this, but for two centuries we have fallen largely silent about it, preferring instead a narrative about the ‘empirical method’ or, ‘the logic of scientific discovery.’ Science education is full of it, favouring the presentation of results, rather than the human stories of wonder, imagination, failed ideas and those glorious and uninvited moments of illumination that thread through the lives of all who actually do science. Our media mouths the same message – ‘there is no room for imagination in science’ assured the presenter of a TV documentary on computer science, face to camera. No wonder my young colleagues became disillusioned.

If scientists are somewhat shy about their experiences of imagination, then I found that the artists, writers and composers I spoke to needed the same patience (and similarly the occasional drink) to draw them out on their repeated need to experiment. Scraping the paint from the canvas, re-drafting the novel for the tenth time, rescoring the thematic musical material is, as every artist knows, the consequence of the material constraints that creativity meets unanticipated. The artist, too, makes hypotheses about how her material, words or sounds will achieve the goal in mind, however indistinctly conceived. The historically simultaneous birth of the English novel and the experimental method in science turns out to be no coincidence. Without making the naïve claim that art and science are in any sense ‘doing the same thing’, the similarities in the experience of those who work with them are remarkable. They need digging out because they become obscured by scientists shy of talking about imagination and artists about experiment.

The project of listening to anyone who creates, be it with music or mathematics, oil paint or quantum theory, and the creative power of the constraints they encounter, became itself the project of a book. Yet in a strange obedience to the pattern of its material, the originally-imagined plot of The Poetry and Music of Science refused to play out. Juxtaposed catalogues of creation in science and art, followed by an extended ‘contrast and compare’ essay, increasingly failed to do justice to the material. Historical and contemporary sources were telling a very different story about creative imagination, one that did not divide across the worn-out lines of ‘The Two Cultures’. Instead, a pattern of three ‘modes’ of creative expression seemed more faithful.

Visual imagination is, of course, the chief source for the artist, but the same is true for many scientists, from molecular biology to astrophysics. Astronomy is the provider of the original projective perspective. If the observer of a painting is asked to re-create a three-dimensional world from a representation or impression on a two-dimensional canvas, then the task of ‘seeing’ the universe from the picture that we call the sky, bears clear structural resemblance.

A second mode is textual and linguistic. The entanglement between science and the written word in prose or poetry may possess a principle knot at the birth of the novel, as we have already noted, but its story is a much longer one. It also has an ‘alternative history’, envisioned by Wordsworth (and surely Goethe and Humboldt before him) in which

The remotest discoveries of the Chemist, the Botanist, or Mineralogist, will be as proper objects of the Poet’s art as any upon which it can be employed, if the time should ever come when these things shall be familiar to us.

With notable exceptions (such as R S Thomas and occasionally W B Yeats in poetry, and the ever-present fluttering trespass of Vladimir Nabukov’s beloved butterflies from his scientific work into his novels) this early-Romantic vision has sadly yet to be fulfilled, and is surely frustrated by the very desiccated presentation of science with which we began.

Imagination’s third mode appears as both pictures and words fade away. For there, when we might have expected a creative vacuum, we find instead the wonderful and mysterious abstractions of music and of mathematics. This shared space is surely why these two have something in common – it is surely not their superficial sharing in numerical structure that links melody and harmony with mathematical structure, but their representational forms in entire universes of our mental making.

When a journey has taken one to as numinous a place as this, it is but a short step to recognise the need for theological thinking to make sense of it all. The anthropology and cognitive neuroscience of creativity is fascinating, the one taking as to the stone tools of our distant ancestors at the dawn of humanity, the other to the delicate balance between the analytic left hemisphere of our brains and the integrative right. The philosophical tradition is equally rich, discovering, for example Levinas’ suspicion of the ‘visual’ mode for its implied distancing, preferring the ‘musical or auditory’ for its immersion of subject in object. But theology seems to be unique in maintaining possession of the critical tools necessary to tease out the role of purpose in human creativity. Both the artistic and scientific modes of re-imagining nature seem to have been part of what drives humans to be human for as long as the records of those attempts have survived. It is the rich tradition of understanding humans themselves as some form of living ‘image’ – the Imago Dei – that does justice to the experience of deploying creativity to a purpose. George Steiner wrote in his Real Presences:

Only art can go some way towards making accessible, towards waking into some measure of communicability, the sheer inhuman otherness of matter
I could say precisely the same of science.