Nature, the international general science journal, published an article this week about the Christian Leaders in an Age of Science project that I co-lead with Revd. Prof. David Wilkinson, Principal of St. John’s College Durham University. Written by our Project Manager, Revd. Dr. Kathryn Prichard, it’s pithy and personal approach has attracted a long and varied comment stream!

Kathryn tells it how it is from the title on:

Religion and science can have a true dialogue

She begins with a personal account of the sort of activity that senior church leaders (bishops and equivalent) get up to with the scientists at Durham University when we get them all together for a day: 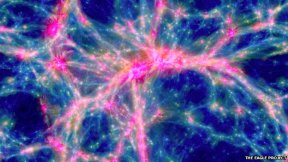 I work for the Archbishops’ Council in the Church of England, and this summer I did something that many people would think is impossible. I sat in a dark lecture theatre engrossed in a computationally generated 3D journey through the Universe. Virtual stars whizzed past and seemed narrowly to miss colliding with my head as we accelerated through galaxies and past exploding stars. I listened to cosmologists speak on research into dark matter, particle physics, the rate at which the growth of the Universe is accelerating and the possibi­lity of multi­verses. I asked questions and they responded.

Read the open-access article itself to find out more!

The comments have been very varied – from the predictable (the article itself anticipates them) vilifying Nature for dropping its standards, to nuanced and personal comments from scientists who are Christians, and have thought deeply about the relation between their faith and their science.  Those that see only negative tensions between religion and science might bear in mind a few sets of ‘data’:

(1) It is historically uncontroversial that religion, and Christianity in particular, served as a stimulus and support for science. Francis Bacon articulates the theological reasons for the rise of experimental science in the early modern era, to take just one key example.  A great collection of reading here is Galileo Goes to Jail – and other myths about science and religion (edited by Ron Numbers)
(2) The ‘conflict’ notion is, for the most part, a historically invented polemic myth from the late 19th century (see the ‘Draper-White’ thesis), constructed for other reasons (the new book Territories of Science and Religion by Peter Harrison is well worth a read for both these points)
(3) The extraordinary scientists throughout history who have found deep motivation from and connections with, their faith to do science, are testimony to the positive support for science at the personal level (Copernicus, Newton, Boyle, Maxwell, Faraday, Born, … to name a very few)
(4) Our project aims at catalysing the potential support for a healthy understanding of science and scientific thinking that the church can give at personal, local and national level, and which is natural for it to do. We’ve seen great examples of churches supporting science festivals, for example. We are working with senior leaders because they tend to come from humanities backgrounds and lack confidence (but not intelligence, learning or enthusiasm) in science. Their meetings with the scientists we arrange under science themes have been transformation for both, time after time.

Perhaps the most important clue to the ways in which a healthy religious life can support science at its core was given by the Nobel Laureate Isidor I. Rabi when once asked why he became a scientist:

”My mother made me a scientist without ever intending it. Every other Jewish mother in Brooklyn would ask her child after school: ‘So? Did you learn anything today?’ But not my mother. She always asked me a different question. ‘Izzy,’ she would say, ‘did you ask a good question today?’ That difference – asking good questions -made me become a scientist!”

As it turns out, ‘Izzy”s mother was displaying the most faithful awareness of her Jewish tradition – for any close reader of the Bible (this ought to include Christians as well of course) is immediately struck by the importance all the writings urge of questions.  One of the tired  and uninformed canards in the science and religion conversation is that the latter cuts off questions in place of acceptance of dogma.  Nothing could be less accurate.  One of the oldest nature-wisdom poems we possess is to be found as ‘The Lord’s Answer’ in the Book of Job. It consists entirely of questions about the workings of the natural world, from the stars to the lightning and snow, to the wild animals and the trees.

The very greatest question, ‘What is Truth?’ appears at one of the most climactic moments of the whole Biblical narrative, in the tense and probing discourse between Jesus and Pilate before the crucifixion. There is no greater gift to those who would seek to know and to understand than a great question.