“Do you have wisdom to count the clouds?” asks the voice of God from the whirlwind, within the stunningly beautiful catalogue of nature-questions in the Old Testament Wisdom Book of Job. I have become increasingly convinced that it is with this text where all Biblical explorations of our exploration of the natural world much start, balancing as it does both the light and the dark sides of the world; the sunrise and the hurricane, the known and the unknown. If discussions of science and religion sometimes get bogged down in Genesis, perhaps that is because they have not made the preparatory journey through the rich material of the Wisdom books. Their nature-writing also contains a collection of creation-stories. They use simpler language and metaphors than the developed Genesis texts speaking of creation by setting in place boundaries and foundations, demarking the heavens and the earth, order and chaos. The tradition reaches its zenith in Job.  Scientists of all faiths and none are invariably impressed by their first reading of “The Lords’s Answer” (Job 39-42) with its ancient exploration of the stars, meteorological phenomena, the living world, and strange unknown beasts. God’s final answer to Job’s complaint that the Creator is as out of control of moral justice as He is of the workings of creation itself, has a striking and unusual form: each verse is a probing question. Surely more of an invitation to think and to observe than a mere put-down, they direct Job out of himself and into the world around him. Perhaps therein is the deepest connection to science – we know that our fundamental creative step is to frame the right question, not to jump to the next neat answer.

I have long hoped to take a scientist’s personal reading of Job, and other Wisdom texts, as the starting point to make the case for science as a deeply human and ancient activity, embedded in some of the oldest stories told about human desire to understand the natural world. In Faith and Wisdom in Science (OUP 2014) this starting point has inspired a journey towards modern science that visits stories from medieval, patristic, classical and other Biblical sources along the way. Writing in the North-East of England I have, for example, found delight in the scientific writings of our local 7th century scholar, the Venerable Bede.

Not only a great early historian (famously the author of An Ecclesiastical History of the English Speaking Peoples), Bede sees his calling to expound wisdom as a Christian scholar to include an account of the workings of nature so that people should not be afraid of it, but should understand.   In his account of natural phenomena, De Natura Rerum, he even corrects Pliny the Elder’s wrong theory of the hydrological cycle, identifies the influence of the Moon as the principle cause of the tides, and ventures a natural explanation of earthquakes as subterranean instabilities. The book whose current chapter we call ‘science’ has many previous episodes. Taking such a ‘long view’ of the history of science with its roots in Biblical wisdom, I wonder whether much of the current ‘science and religion’ debate operates within a wrong assumption about the narrative relation of science and religion. The activity we now call ‘science’ maintains continuity within human culture as old as any story, art or artefact.

A close reading of modern science from the perspective of ancient wisdom tradition unearths a second damaging, hidden assumption – that ‘religion’ and ‘science’ are culturally separated not only by time but by the domains in which they apply. Discussion of ‘non-overlapping magisteria’ and its variants, for example, seems inconsistent with the fields themselves. It adopts a geometry of their interrelation which is inconsistent with their own desire to speak about the whole of creation. A narrative approach, by contrast, is able to develop an approach to science (or in its more ancient form natural philosophy – the ‘love of wisdom of natural things’) that can draw on theological and cultural roots.

The narrative journey of wisdom soon picks up recurring themes that begin to weave a theological background for science. Although the Bible doesn’t speak in modern scientific terms, it does reflect over and again on our human relationship with nature – the foundation on which science builds. At each point wonder and responsibility come together – and the meeting is often painful.  From the thorns and briars of Genesis 3, to the destructive earthquake and floods of Job, the terrifying deconstruction of creation in Jeremiah’s prophecy (Ch4) and even the groaning of all creation in Romans 8, we are reminded that Bede was right – we do need to mend our relationship with nature. Following this theme of pain in human confrontation with nature constitutes one way to develop a ‘Theology of Science’ (rather than settling for conflict, truce or separation between Theology and Science). In doing so we recognise that both scientific and theological worldviews must be ‘of’ each other, for each must speak about everything that is. Theology must speak of science, not just to it. 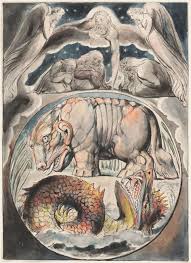 From William Blake’s series of paintings depicting scenes from the Book of Job. Behemoth and Leviathan
Wikimedia commons

A ‘theology of science’ embraced fully within mission, teaching, worship, prayer and practice also urges the church to drop any perspective which identifies science as a threat, but rather assume one that sees it at the heart of our human calling to live as agents of healing and hope within the natural world. The approach through Biblical wisdom in both Old and New Testaments can begin to add color to what a ‘theology of science’ might mean. There are seven strong ideas that reappear worth summarising here:

(1) a linear history from creation to new-creation – learning about nature is one aspect of our story that makes the future different from the past;

(2) the astonishing human ability to understand matter – seeing deeply beneath the surface of phenomena is what God himself does, and calls us to follow;

(3) the association of Wisdom with knowledge of nature introduces a duality that then drives a careful consideration of science with technology – we have a responsibility to work in fruitfulness with the world rather than exploit it;

(4) the pain of the human-nature relationship reminds us that, like all callings, engaging with nature under God’s authority will not be easy – at its simplest level it affirms that doing science is hard;

(5) the tension between order and chaos is ever present – as well as one reason for the pain of the storm and the earthquake, it also reminds us that a perfectly ordered, crystalline world is a dead world;

(6) the central role of questions affirms the risky and open journey – and the humility of living as learners;

(7) the exercise of love needs to be present – both in dealings with the natural world and among the community of disciples who answer God’s invitation to Job and those who follow to seek answers to its deep questions.

Each of these seven themes finds continuity and application with science today and its role in society. For example, the ancient theme of chaos motivates a closer look at statistical mechanics and its consequences for science-theology studies (so building on the more usual topics of cosmology or quantum mechanics). Again, the idea of doing science as an expression of love initially appears strange, but is actually an honest experience that might do much to demystify science and reveal the deeply human commitment it draws on.

A condensed statement of this ‘Theology of Science’ draws on St Paul’s masterly summary to the first-century Corinthian church of the entire Christian calling he shared with them: ‘we have the ministry of reconciliation’. If the business of Christianity is the healing of broken relationships, as St. Paul would have us understand, then when we do science, perhaps we are expressing a ‘ministry of reconciliation with nature’. Like all damaged relationships which we start ignorant and fearful, and lead to hurting both parties, the vision is of ignorance replaced by understanding, and exploitation and harm by work within wisdom. Surprisingly, science becomes a deeply religious activity – it finds a locus within a religious worldview, not opposed or outside it.

There are urgent lessons for the church from Biblical wisdom and a long human story of science: thinking through the purpose of science within the calling of the people of God might equip the community of believers better to deliver a distinctive voice into the troubled public world of science and technology. There are important decisions to make, and make soon, on the political process of decision-making in science and technology, our relationship with the global environment, our ability to manipulate the genetic code. There are better ways of treating science in education and in the media, and healthier narratives by which both religious and secular communities can celebrate and govern science, than those that currently dominate the public forum.

Understanding science to be situated within a larger, Biblically-informed, theological project of healing and reconciliation shows that, far from fearing its consequences, the church can embrace it as one of God’s greatest gifts and callings.

One thought on “The Tradition of Wisdom for Today: a Relational Theology of Science”